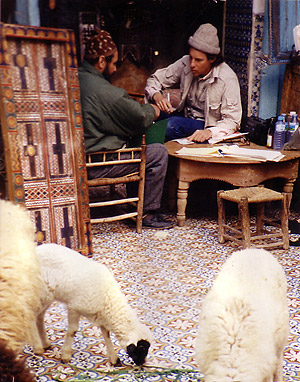 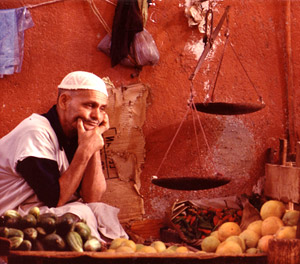 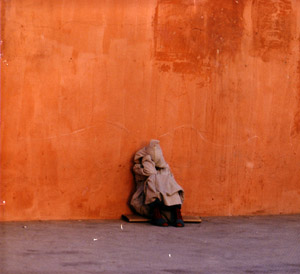 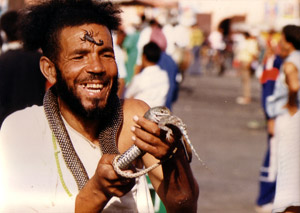 T.R. Lawrence and his wife, Linda O'Leary have always been adventurous. They met as young twenty-somethings on South Padre Island, Texas, and within six months were on their first trip to Marrakech, Morocco. Marrakech in the late 70's was an experience that filled all of the senses. To this day, Marrakesh is still semi-Biblical in many ways, especially in the Medina areas where T.R. and Linda would choose to spend their time. Exploring the souks on bicycles and discovering antique rugs and artifacts as well as the newest artisanal offerings, they imagined a retail store back in the States that could showcase these treasures. In 1981 they opened NOMADS on Sunset Blvd in Houston, Texas, and soon after were manufacturing a large, successful handbag line in Morocco which they exhibited in Dallas at the twice-yearly trade shows. Handbag manufacturing opened up other doors, and soon they were off to manufacturing household items like lamps, armoires, coffee tables, windows, as well as designing women's accessories like hand-beaded belts and evening bags, and ethnic jewelry. The first ocean container that they shipped from Marrakech for delivery in Houston was filled in an interesting way. All the donkey cart drivers and machue drivers (men that did not have a donkey, but still had a cart) would start at 10:00 p.m. and work through the night when the roads would finally be empty of cars and the millions of bicycles that filled the streets in the daytime. Linda and TR learned then that sugar was not just for peoples coffee or the hundred glasses of mint tea you would drink in a day, but was actually a term used to get the train driver to move the train 10 feet or so to allow the ocean container to be filled. During their many trips, TR and Linda would also travel to outlying villages, in rental cars or public buses filled with live chickens and goats and masses of humans. They would find embroidered shoes with Goodyear tire soles, and antique pottery used for water storage or olive oil in small villages. They once bought 100 used wooden washboards that had an amazing patina from pounding the clothing for so long in the rivers; another time they found an old grouping of shoe molds, hand carved and still in use for making the heel-less babouches shoes. Other treasures, now long forgotten, were old Tuareg tribe leather camel cushions, carved stone molds that were used to make home made bullets for hand carved guns, and carved wooden keys for hand made locks. Often they would try to bring humanitarian help to the villages, once involving a dentist from St. Louis who donated hundreds of tooth brushes, another time getting used clothing from a church group in Texas that they donated to the poor. They started a tour business in the early 80's specializing in Artist groups that would come to paint and learn and open their eyes to another side of life. In 1988 they moved to Santa Fe, New Mexico. Santa Fe is well known for its large art market and was even more suited for the type of things that they were finding in Morocco. The next 10 years found them doing even more manufacturing, as well as designing and producing a Bath and Beauty Line called Nomads, and importing and bottling olive oil from Morocco, of the same name. They exhibited at the Los Angeles Gift shows, San Francisco and Chicago Tribal shows, the Fancy Food Shows and supplied retail stores throughout the U.S. By this time they also had one of the finest collections of antique Berber weavings from Morocco, and they were involved in many solo and group exhibitions, including the New York Tribal and Textile Exhibition, the Frank H McClung Museum in Knoxville, the Vancouver Museum of Art, and The Durango Textile Art Museum to name a few. They have been guest contributors to a number of books including, Arts and Crafts of Morocco, Windows on the Maghreb, The Shinning Cloth Dress and Adornment that Glitter, and The Fabric of Moroccan Life.