After buying thousands of carpets in Morocco, these are what I consider to be the most valuable and collectable. Value to me has to do with tightness of weave, the use of primarily natural dyes, and those that are woven by a skilled weaver. These textiles were also our teachers, and we learned through them to appreciate this quality.Many of the weavings have been included in Museum shows across the United States, in private exhibitions, and have been photographed in other publications.

Solo Exhibitions: 1981 Surroundings Gallery Houston, Texas 1983 City Library Houston, Texas 1984 Textile Art Gallery Houston, Texas 1985 Transco Art Tower Houston, Texas 1986 Balen Art Gallery Houston, Texas 1997 Durango Textile Art Museum Durango, Colorado Group Exhibitions: 1978 Nannygoats Gallery Tucson, Arizona 1980 Los Angeles County Art Museum 1991 Chicago Tribal and Textile Art Exhibitions 1992 New York Tribal and Textile Art Exhibitions 1992 Frank H. McClung Museum Knoxville, Tenn. 1993 Vancouver Museum of Art 1997-2005 San Francisco Tribal and Textile Art Exhibitions 2002 Indianapolis Museum of Art Listings in Publications/Guest Contributor: Arts and Crafts of Morocco Windows of the Maghrib – Tribal and Urban Weavings of Morocco Moroccan Carpets The Shining Cloth, Dress & Adornment that Glitters The Fabric of Moroccan Life Selected Press: Houston Home & Garden Magazine July 1983 Houston City Magazine July 1983 Ultra-Magazine June 1987 Santa Fean Magazine March 1999 The New Mexican March 2002
Among the domestic activities of the mountain peoples, those which involve wool are the most important. The women card, spin, dye and weave their clothing as well as their furnishings. The sheep are their most important possession. Concerning the wool, the raw materials of carpets, shepherds across the Atlas Mountains credit it with multiple virtues. In some tribes, a woman makes a pact with the lambs. The day of her marriage she puts her foot on the neck of the sacrificial lamb and says, “I am leaning on you; only when you leave your soul will you leave me.” Wool is protection against obscure powers, bad influences, demons and their telluric forces. A simple tuft of wool in a girl’s hair represents and effective talisman. A wool thread around the leg of a mule, horse or cow will provide these beasts of burden with unlimited blessings and with protect them from any risks of illness or evil spells cast by envious souls. All Moroccan rugs are woven on a fixed-heddle loom. The Berber loom has two very solid wooden posts, which in their upper and lower portions are supported by two braces, the beams held by cords. The warp threads are woven around the lower beam. Mounting the warp on the loom is a very difficult operation requiring the experience of an old woman. It is also assumed that old women can chase away the demons who might disturb the work and entangle the threads. Ahmed Sefrioui / From the Far west: Carpets and Textiles of Morocco 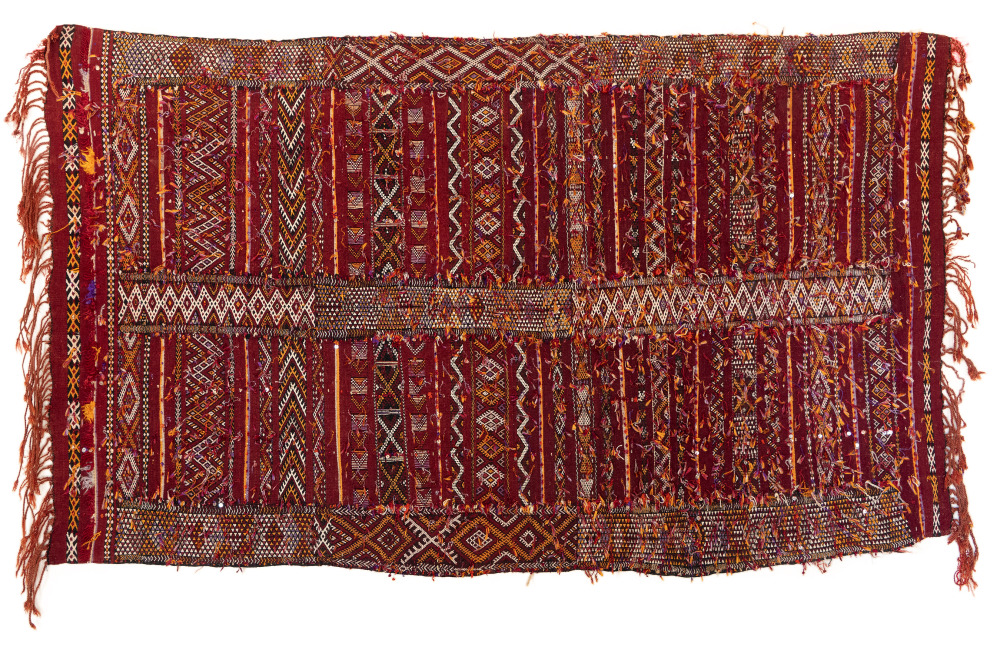 The weaver of this piece has shown unusual initiative and skill in incorporating numbers pf patterns into the broad vertical stripes as well as the horizontal bands of the saddle rug. Note the freedom of pattern in the vertical bands.
Shop Now
By the early years of the 20th Century, Henri Matisse and any other European artists and designers had also become intrigued by Morocco, and were collecting Moroccan textiles for artistic inspiration. Moroccan textiles include some of the most colorful and powerful in all of Africa. The rhythmic variations in design and patterning, the variety of textures, the vibrant colors and the power they embody set the apart from other Islamic and African textiles.
Through these textiles, Matisse was so drawn to the Maghrib that he was to remain there from 1912 through 1913. He created twenty-three paintings during this time in Morocco, which he said changed his entire life. His friend Paul Gauguin (who had a passion for rugs in general) advised him to look at rugs if he wished to see color, texture, mood and exoticism. Thus Matisse drew many lessons from his observations of Moroccan textiles and costume. James Jereb Ph.D / Morrocan Carpets 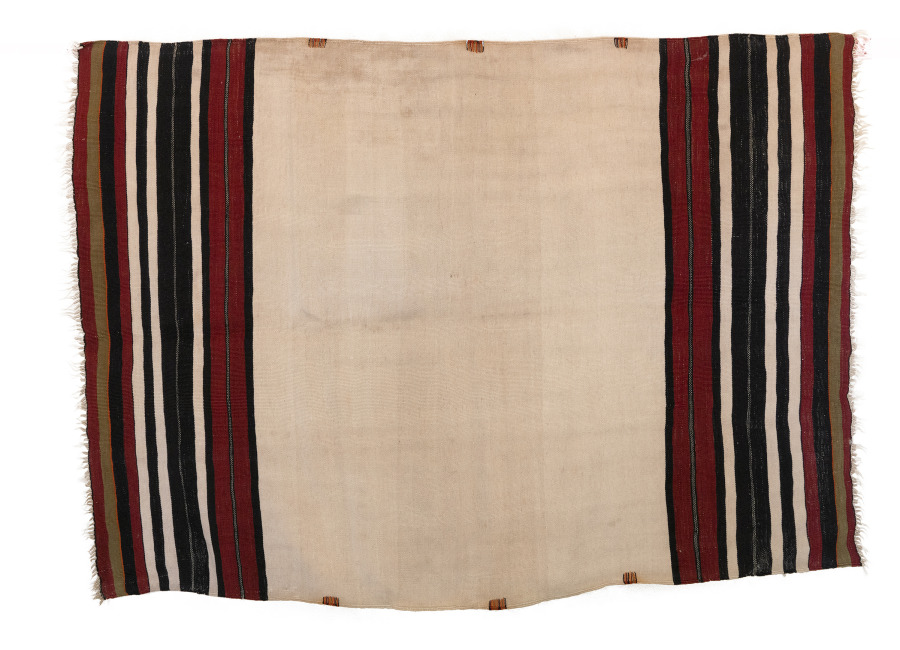 Simple stripes decorate the shawl of this tribe, the Ait Haddidou who occupy a remote area of the High Alas Mountains. Small touches of color along the side selvedge add interest to the plain center section. The warp ends are finely twinned in this exceptional weaving worn to protect against the mountain winds.
Shop Now
Textile production, which in Morocco can be divided into clothing, weaving and embroidery, is the greatest artistic tradition, due mainly to the large number of people involved and the extent of the materials used. It is also one of the most ancient: when the Berbers came to North Africa in 1500 B.C., they brought with them some form of primitive weaving techniques, employed for both utilitarian and magical or religious purposes. The movement of nomadic peoples, and the trade between the Berbers, Black Africans and Arabs, with the transport of goods from north to south, and west to east across the Sahara, as well as contact with Europeans, nurtured external influences on Moroccan culture and its artistic traditions. Moroccan weavings are a legacy of that trade. Many decorative weavings have a ceremonial as well as a practical function, and as such have a sacred status. A handira, for example is used to wrap a bride en route to her new home, while some blankets are used as funerary gifts to spread over a woman’s shroud. The finest rugs, blankets and cushions are used to decorate guest tents during the moussem and, when worn or carried to a marabout, are used to honor the saints (marabouts can mean either holy man or holy shrine). All such weavings contain baraka (meaning the divine force of God’s blessing. It is used to denote a mysterious force, which has healing or blessing power) and are entwined with age-old customs, rituals, and beliefs of Berber culture. The protective, magical and mysterious properties the Berbers believe their textiles possess are arguable even more important than their complex social and decorative aspects. The animistic culture of the Berbers, one of the few remaining in Africa, is inspired by the natural world: references to the sun, moon, stars, plants and animals form a large part of their artistic vocabulary. Weaving motifs, patterns and designs act on different levels. They can identify a family or tribe, through tattoos or wasms (Arabic for tribal identity marks), ward off evil and bring good luck as a talisman, depending on the significance of each symbol used. Alone among African and Islamic weavers, the Berbers believe that their finished weavings evoke a power capable of protecting not only the weaver and her family, but the textile itself. Among the motifs most frequently encountered is the hand of Fatima, used to ward off the evil and the djoun. This symbol can be represented in weavings by a variety of stylizations, including crosses – either at right angles or diagonally, triangles, lozenges or eyes, tattoos or wasms. Representational designs of motifs such as scissors, weaving combs and knives, are believed to counter the effects of the evil eye. Others, such as snakes, lizards, scorpions and turtles are associated with fertility and have prophylactic functions against adultery. Danger from any of these creatures is also believed to be averted by the use of these configurations. In Berber circles, it is said that no two rugs are ever alike. Perhaps the key element to this is the freedom of the weaver to express herself – a freedom entrenched in the most ancient traditions. In the rural areas, weaving involves the social gathering of women, who sing and chant about times of plenty and romance and tell tales of superstition and magic as they work. For these women, weaving is an age-, old tradition, passed down from generation to generation - a Berber girl traditionally learns the art of weaving from a female relative. It is a skill that commands great respect and prestige, and the likelihood of a greater brides’ price. Moroccan tribal weavers have since ancient times prepared dyes from local vegetable and mineral sources, which they gathered themselves. Indigo was used for blues and greens, madder root for red, pomegranate skins for blacks, saffron and almond leaves for yellow, and tea, henna and a variety of indigenous plants for red-brown earth tones. James Jereb, Ph.D Arts and Crafts of Morocco 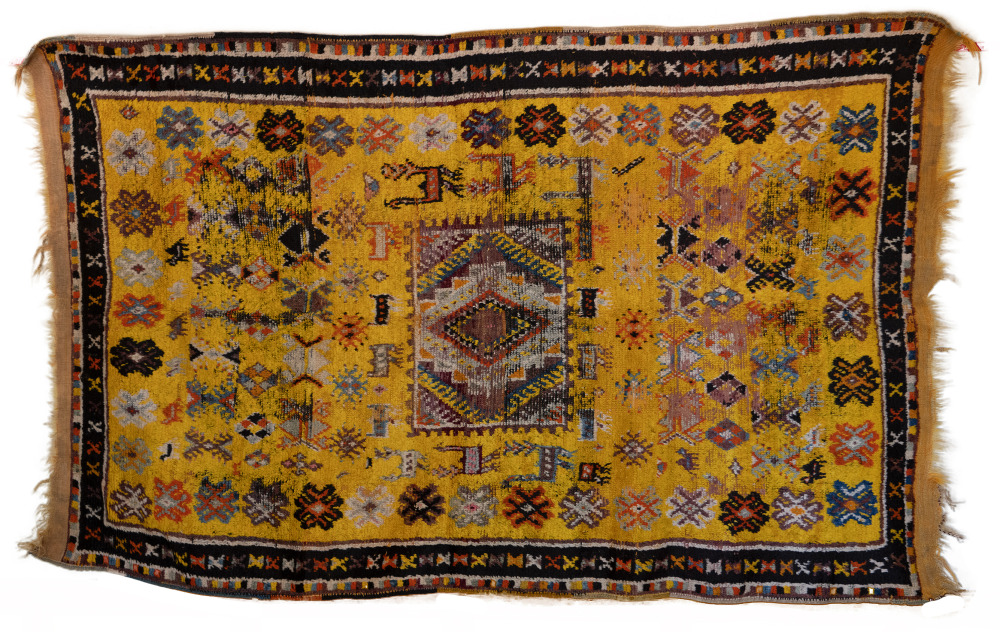 A fascinating combination of motifs symbolize the nomadic life of the Zenega, a tribe that occupy an area between the Anti-Atlas and the Sahara Desert. Camels, Ostriches and other fanciful designs are included, yet the types of designs and strong border, and central medallion are suggestive of the Ait Ouaouzguite. Also, the foundation weft is dyed in several different shades, appearing as horizontal bands on the reverse.
Shop Now
The traditional geometric patterns decorating Moroccan rugs, textiles, pottery, jewelry, tattoos and henna paintings stem from a system of visual communication and often convey a rich variety of meanings. These symbolic patterns expressed messages about the maker, her identity, her family, religion, customs and beliefs. They were part of an oral tradition, which is passed down from mother to daughter. It is important to avoid reading too much meaning into or oversimplifying these patterns since it is possible to overstress the significance of some designs or perhaps trivialize others. For Moroccans, these designs possessed power and energy: however their very abstract nature enables them to embody a wide variety of meanings that are flexible in their implications. Niloo Imami Paydar, The Fabric of Moroccan Life 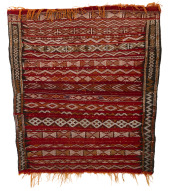 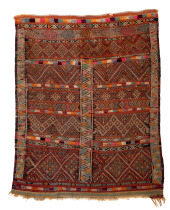 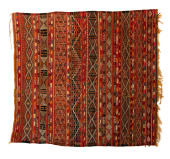 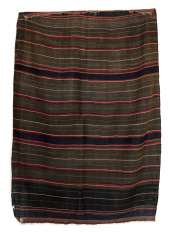 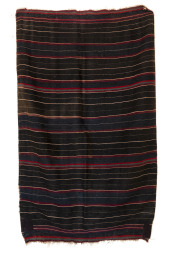